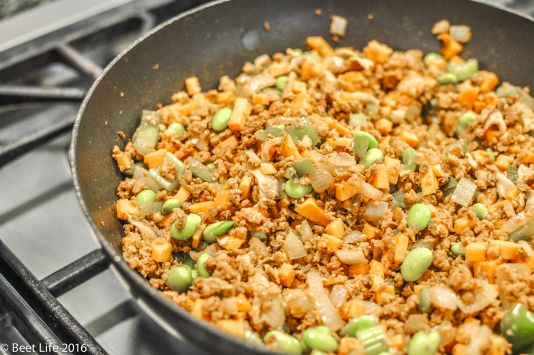 Giniling Guisado is ground pork marinated in soy sauce and calamansi juice (lemon/lime) that is typically sauteed with tomatoes, potatoes, carrots and bell peppers. This was one of the Filipino dishes I missed the most when we became vegan. I loved the texture and tanginess of the dish combined with white rice! Giniling is the Filipino version of Picadillo, a Spanish and Latin American ground beef hash. Picadillo is usually made with raisins, diced potatoes and tomato sauce.

I discovered Gardein Beefless Ground a few months ago and that was all I needed to start making Giniling again! I made other changes to the traditional recipe. I did not use tomatoes, and doubled up on the lime. Instead of soy sauce, I used Bragg’s Liquid Aminos. I also used sweet potatoes instead of potatoes, and added shiitake mushrooms for a meaty texture.